Posted on June 26, 2014 by SinistralRifleman

Ironman 2014 marked the 10th Anniversary of Trooper Class.  I’m the only person who has competed in Trooper Division at all 10 Ironman Matches that have featured it.  As one of the division’s founders I’m glad to see it remain popular over the years.  The first year had only 7 competitors and the past several have had over 30 each year.  Trooper is second only to open in popularity at the OLHOT half of the Ironman 3 Gun Match (the match is split into separate Tac Scope and everything else matches now).

Ironman has always been a great test bed for firearm reliability and limitations.  This year was no exception.  In years past I’ve practiced with the exact equipment I’d use for Ironman for 2-3 months a head of time at every local match I could shoot.  This time I didn’t get the opportunity to do that.  Much of the equipment I used I received for use in upcoming reviews and only had it for 1-3 weeks before the match.  So while I was able to hit the range and get everything zeroed and test it ahead of time, it’s hard to use guns with 100% efficiency without using them at multiple matches ahead of time to get acclimated.  So with that in mind, I did better than I expected to placing 6th/33 Shooters.

Tyler Payne of the Army Marksmanship Unit took 1st again this year, with the change of using a 9mm M16 for both pistol and rifle targets on some stages.  Sean Smith took 2nd again, narrowing the gap between himself and Tyler Payne by a good margin this year.  Iain Harrison, Recoil’s editor in chief, took 3rd Place…much like me throwing a bunch of guns together at the last minute to use the match as part of upcoming reviews.

The biggest gear problems I had this year were with electronics.  My VIO POV HD camera died halfway through the match, losing signal from the camera to the recording module.  It’s back at VIO again for repair.  My Peltor ear pro also started glitching out because I sweated too much into it and it would turn off and on randomly.  I had to pull the batteries out because it turning off and on along with the off/on sound effects during stages was distracting.  I let them dry out and they were fine after that.

I’ll save the details of using the guns for other reviews, but here’s what I took to the match 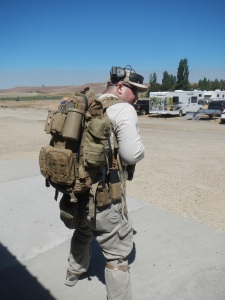 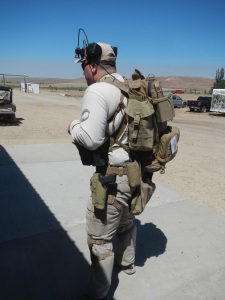 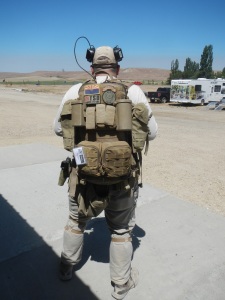 I also attached the following to pouches on the outside: Cleaning Kit, tools, batteries, Snacks, 2 Liters of Water.  The ability to lay it down flat and open the whole thing up made it much easier to keep all my ammo seperated and organized than other packs I have used in the past.

Stages in the order I shot them

Stage5:  This is the only stage that I  had a reason to use a pistol on this year.  I did not want to carry the dummy and deal with a slung subgun at the same time.  Every other stage, the way the stages flowed combined with the ability to preposition the pistol caliber carbine made a pistol less useful for Troopers this year.   Shooting prone I induced malfunctions with the pistol because the magazine made contact with the ground under recoil.

Stage 6: This stage was mandatory support side shooting.  It would have been a good run if I had been able to get the clays underneath the truck easier.  After I shot and watched other shooters on the same stage it was apparent there was a small dirt rise on the way to the targets we kept skimming rounds across causing deflection.  Otherwise my all PCC approach to this stage worked pretty well and I used Shotgun only for the targets that I had to.

Stage 7:  One of only 2 Stages I used my .223 rifle on.  I used it here because of the combination of 100-400 yard steel and paper rifle targets from the same position.  The slug double spinner I fired at only once because it was at 80 yards and thus at the limit of mechanical accuracy for slugs. It wasn’t worth chasing so I ate the 60 second penalty.  There was only one visible hit on it when our squad came through so most of our shooters did the same thing.  Later squads shot it with rifle from the roof top; because it wasn’t expressly prohibited it was allowed.  If I had known I could do this I would have shot it with rifle as well; failure to rotate double spinners is a 60 second penalty.  Note to self; ask the ROs more questions next year when things like that come up.

Stage8:  This stage required all shots be fired underneath the spools.  Skinny guys and junior shooters had an easier time here.  I shot the whole thing urban prone with my left shoulder on the ground to get as low as possible.  I did ok on the pistol and rifle portions with the BAP 9mm, but the shotgun portion was painful.  Getting angles on the targets was harder with shotgun and I ended up pushing it away from my shoulder to get a few.

Stage 9:  This was my best stage of the match.  Using PCC from pistol to rifle portions was very smooth.  I was able to rotate the double spinner with slugs at the end.

Stage 10:  I did fairly well on this stage too, but the POV cut out in the middle.  I used the .308 rifle here to more easily rotate the rifle double spinner.

Stage 1:  Cooper Tunnel.  I used the .308 again on this stage to make the double rifle/spinner rotate easier.  By this point in the match I was feeling sore and stiff, crawling through the tunnel was slower as a result.

Stage 2: 2 Double Rifle Spinners here so I used the .308 again.  I only really got to practice with my optic on the .308 to 200 yards before the match so I ended up shooting more at long range targets than I wanted to here.

Stage 3: I  used my lightweight CAV-15 MKII Rifle here.  I realized after the fact that I pulled the Samson Evo  free float tube loose under recoil with the way I braced on the tower pulling back against my  bipod.  It was contacting the front sight which explains some deflection on the long range targets.

Stage 4:  Sorry no video.  This stage had a 90 second par time and was shot twice, once from each shoulder.  Shooters had to neutralize as many targets as possible in the par time.   Looking at it, I did the math and realized all the rifle targets and the double spinner would take longer to engage than the penalties.  I shot all the pistol targets with the BAP 9mm, and the Slug Plates.  I had the second highest score in Trooper with this methodology. 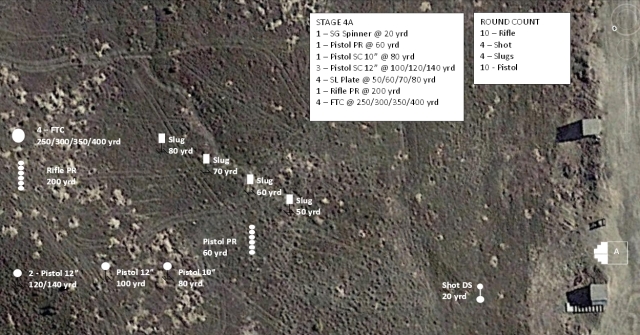 I've been competing in the action shooting sports since 2002. I believe competition shooting to be an excellent way to build gun handling and marksmanship skills and encourage all gun owners to seek out some form of competition shooting. Anyone can become reasonably good at it if they devote the time and resources to do so. Winning, while nice, need not be your goal; bettering yourself through the pursuit of excellence is something we all can achieve.
View all posts by SinistralRifleman →
This entry was posted in CAV-15, Competitions, Ironman 3 Gun, VEPR-12. Bookmark the permalink.