Posted on July 6, 2014 by SinistralRifleman

The Ironman 3 Gun is the highest round count 3 Gun match in the United States. The stages take up to seven minutes to shoot. The long days on the range and environmental conditions take a toll on shooters and guns alike. These factors are what make the match interesting and enjoyable for me to shoot. They also make it interesting to take people without a lot of match experience and throw them into it to see how they do. Every year I try to convince someone who hasn’t shot competitively very much or at all to go with me.This year I convinced John Brooks to go to the match, and as you’ll see from his background below he is not an inexperienced shooter. He simply has not shot many 3 Gun matches.

Ironman also coincided with having a Beretta 1301 competition shotgun on loan for a Recoil article. I had previously used the 1301 for Superstition Mountain Mystery 3 Gun, but I wanted to get some more rounds through it to assess longer term reliability. I would be using my VEPR-12 in Trooper division, so I had John use the 1301 for Ironman in Tac Limited division.

The 2014 MGM Ironman would be the second 3 gun match I had ever attended. I didn’t quite know what to expect from the firsthand accounts I had heard and the things I read on blogs and forums. “The most physically and mentally demanding 3 gun match around,” was the general consensus. After my years of military service, time spent as a marksmanship instructor and various shooting disciplines I had dabbled in, I thought, “how hard could it possibly be on me and my equipment?” I started shooting at a young age, and have spent time doing everything from small bore silhouette, DCM and USPSA, to skeet and trap. I was never heavily invested in any of them, but thought this diverse shooting background would be of great help in this endeavor.

I didn’t have a shotgun even close to being considered competitive, so Russell allowed me to use the Beretta 1301 competition he had on loan for an article. I grabbed it just a few weeks prior to Ironman, which allowed me just a few short hours of familiarization and practice that I managed to squeeze in with my work schedule. My first impressions were great to say the least. In wing shooting, a forward weighted shotgun is not a bad thing. It allows for a smooth sweep across a clays trajectory and good follow through on moving targets. For 3 Gun, however, it would seem a light, nimble gun would be better suited to the interrupted swinging on staggered, static targets and aerial clays. The 1301 has this in spades. Its light weight nature, functional lines and solid grip texturing allow for a very pointable shotgun that becomes an extension of your body. It was a smooth, fast shooting gun that handled everything I fed it; from #8 shot low brass target loads to low recoil 1 oz slugs and 3in #6 shot. It became apparent the only limiting factor for this gun would be my level in proficiency in manipulation. 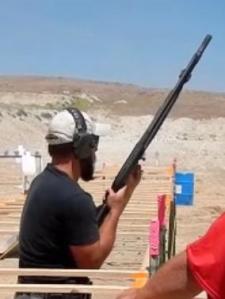 Attending Ironman would be a baptism by fire for the 1301 and me. I drew first in the shooting order on our first stage. I thought this was not exactly ideal for my first time there. I had decided to utilize a weak hand reload technique, since most of my equipment was borrowed, and I had ended up with seven 4-shell caddies. At first, it was slow and painful, but learning on the clock either makes your or breaks you; in this case it made me. On the third day of shooting, I was averaging almost 2 shells per second on my reloads. The 1301’s opened loading gate area and chamber no doubt helped with a quicker learning curve. On stage 3, I was able to shoot the three clay popper targets and the three following aerial clays in quick succession. I was also able to make most of the required slug shots using only the standard bead on the barrel.

Coming from the perspective of a shooter and a gunsmith, there are very few times I have been boldly impressed by a production gun. The Beretta 1301 Competition enthusiastically makes my list. To remain objective for the purposes of our evaluation of the 1301, I opted to conduct zero maintenance on the gun for the entire three days of shooting. The 1301 ran flawlessly despite being exposed to the talcum powder like sand on the range when left with the action locked open in racks and abandonment barrels. For the price, performance, and utility it is everything a limited division shooter could ever want right out of the box. I am convinced it played a crucial role in my third place finish in Limited Division. It will definitely be the next gun I purchase.

I've been competing in the action shooting sports since 2002. I believe competition shooting to be an excellent way to build gun handling and marksmanship skills and encourage all gun owners to seek out some form of competition shooting. Anyone can become reasonably good at it if they devote the time and resources to do so. Winning, while nice, need not be your goal; bettering yourself through the pursuit of excellence is something we all can achieve.
View all posts by SinistralRifleman →
This entry was posted in Competitions, Ironman 3 Gun. Bookmark the permalink.
Loading Comments...