Posted on June 15, 2014 by SinistralRifleman

As part of my review of the VEPR-12 shotgun in Issue 12 of Recoil, I purchased 3 SGM 12 round magazines. They were the only magazines I could find at the time that held more than 5 rounds, and they were the only US made magazines.  The SGM Magazines exhibited some significant problems right out of the box.  The followers obviously dragged, and loading the magazines up, the shells would not feed up freely when pushed out by hand. Shooting these magazines at all before trying to fix them would have been a waste of time. They also would not insert into the magazine well as easily as the OEM magazines, and they would not drop free. I did not bother contacting SGM about these issues because of my prior experience with their customer service with Saiga-12 magazines in 2010. 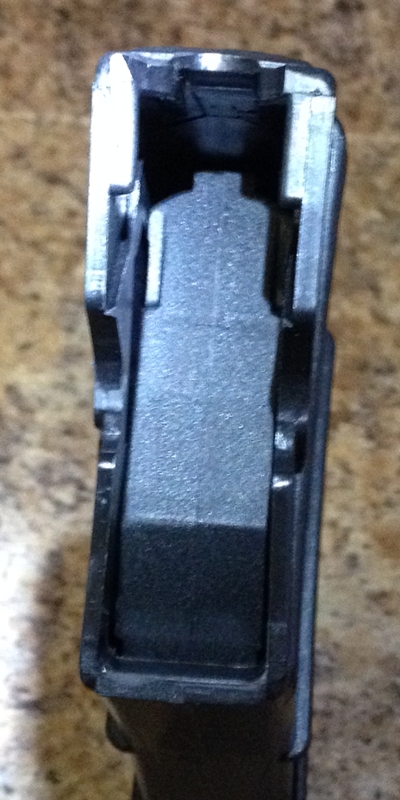 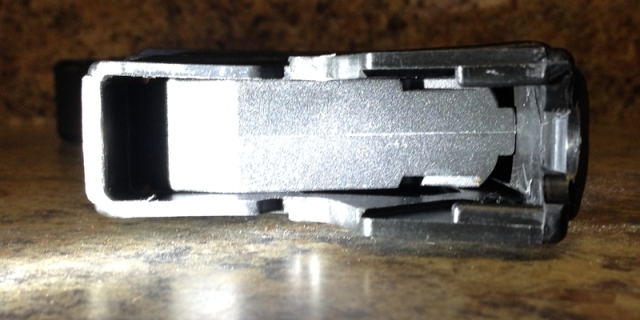 Followers binding right out of the box.

The reason for the follower/shell binding issues is readily apparent from simply looking at the magazine. The SGM magazines are a large injection molded part. The general principle of injection molding is that plastic is heated to melting point, then forced into a mold at high pressure. The part is then cooled in the mold for a short time, then ejected, and the process starts over again for the next part. The SGM magazines show signs of “sink” on the outside of the magazine body that correspond with the points where the shells and follower bind. There are a number of processing or mold design issues that can cause sink; either way SGM’s mold isn’t running right to produce parts. 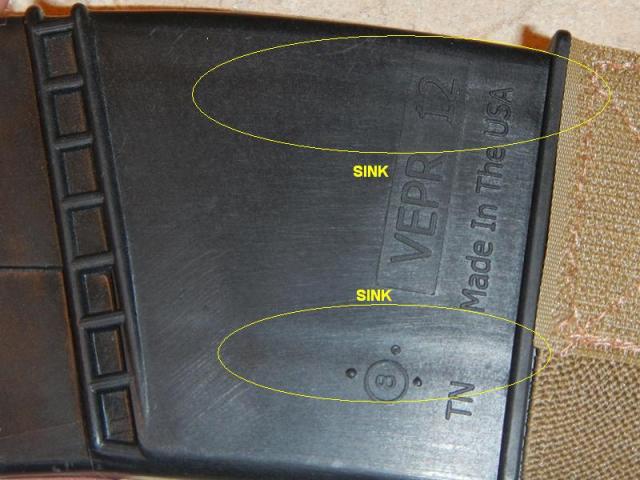 Sink lines apparent on the outside of the part.

I was able to make my magazines work by wrapping sand paper around the magazine follower and pushing it through with a stick until they were able to pass through the magazine body freely. 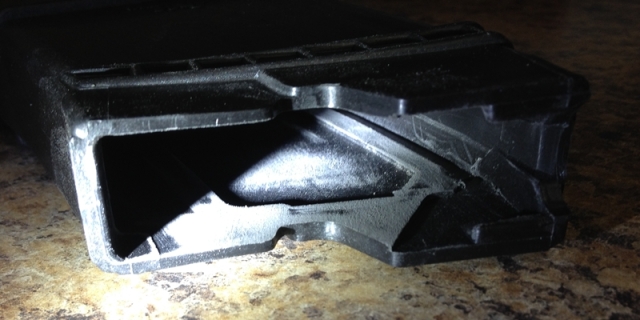 The insertion of the magazines and ability to drop free improved as I used them at home practicing my reloads. Plastic was being shaved away as it contacted the metal parts of the VEPR-12. The magazines proved reliable at two local 3 gun matches. I purchased an Arredondo Magazine coupler so I could start with two magazines on the gun, making reloads faster. I’m two weeks out from the 2014 Ironman 3 Gun match when this happened:

Examining the magazines after the stage showed that the first magazine was missing material out of the locking tab where the mag catch interfaces with it. The other two magazines also show similar wear marks on the locking tabs that I can only assume will eventually wear through. In fairness to SGM, perhaps the weight of two loaded magazines coupled exacerbated this issue. However even the uncoupled magazine is showing these signs of wear, it just gets used less. 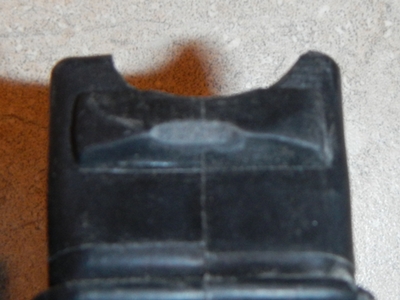 The magazine that fell out 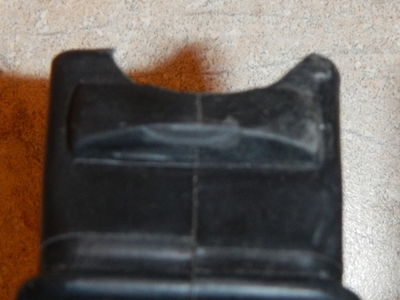 Magazine that has been used the least

By comparison I have had zero issues with the Russian 8 round OEM Magazines imported by Legion USA. They do not show signs of wear on the locking tab that the SGM do.  If you’re using your VEPR-12 for something your life depends upon, use the OEM Magazines. 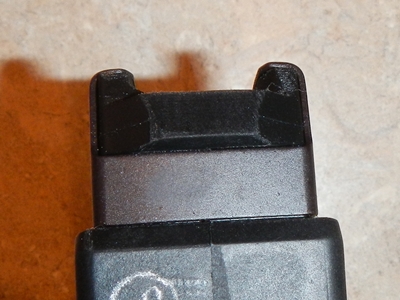 The downside to using Russian OEM 8 rounders is the need to make the VEPR-12 922R compliant. For competitive purposes, the 8 rounders function but put the shooter at a disadvantage against other competitors with 12-20 round magazines. I should note that the R&R racing magwells favored by competitors use highly modified SGM Magazines. These mag wells and magazines do not use the existing locking tab, and instead use a slot cut into the side of the magazine, that is less prone to wear/failure.

I’m glad this happened at a local match that cost me $15.00 + ammo to shoot vs a major match with much more time and expense involved.   I was able to take corrective action before going to Ironman.  A friend recommended that I should reinforce the locking tabs by drilling and tapping some set screws into the back of the magazine and reinforcing it with JB Weld.  I followed this advice and fitting the new reinforced tabs to the gun with a file. 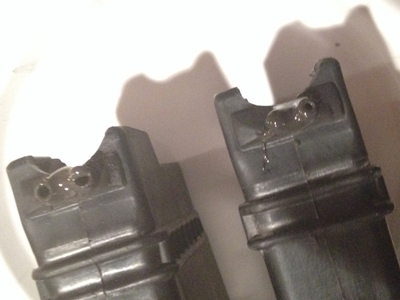 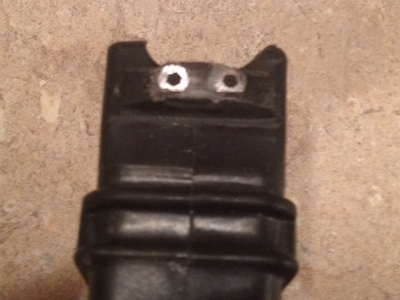 These tabs did hold up and lasted the duration of the Ironman 3 Gun Match.  The coupled SGM mags were my primary start magazines and I would reload with the 8 rounders after that.  The LRBHO feature on the SGM magazines worked intermittently so I offset the magazines so I could more easily rack the charging  handle when switching to the second magazine.

If you buy SGM magazines expect to have to do some modifications to make them function reliably. Inspect them regularly for wear to avoid having your mag drop out on the ground.

As part of my initial testing of the VEPR-12 I zeroed with slugs at 25 yards and opened and closed the top cover multiple times to check for zero shift.  It stayed zeroed relatively well and I did not have a hard time hitting the 18-24″ slugs plates at 50-75 yards commonly encountered at local multigun matches.

While practicing for the Ironman 3 Gun match on an MGM Targets double spinner with slugs at 60 yards, it became apparent that my zero would not be sufficient to hit the smaller 8″ plate on top with slugs at 50 yards.  I rezeroed at 50 yards with a 4″ group, then cleaned the gun.  When I went to practice again a week later, I could no longer hit the 8″ plate on the double spinner.  The zero shifted enough from opening and closing the top cover that when combined with human error I was off target.  I cleaned the VEPR-12 and rezeroed again the day before the match.  I got a 5″ Group at 50 yards.  Needless to say I was concerned about being able to rotate the Double Spinners.  They are worth 60 seconds a piece in penalties if not rotated and  there would be up to five of them at the match.  And I was nearing the edge of the mechanical accuracy required to rotate them.   I decided to not clean the VEPR-12 during the match to avoid effecting the zero.  Thankfully my plan worked and I was able to rotate the mandatory slug double spinners with little effort.  The VEPR-12 worked for the duration aside from some misfeeds with Remington Game loads out of the SGM mags on the first stage I shot.  I otherwise did not have any malfunctions.

Overall the VEPR-12 was easier to use than the SAIGA-12s I have used in the past at the same match.  The mag well and straight insert mags were much easier to reload with and made it less of a chore than with the SAIGA-12.  I do intend to investigate other optics mounting options and eagerly wait for quality US Made larger capacity magazines.

I've been competing in the action shooting sports since 2002. I believe competition shooting to be an excellent way to build gun handling and marksmanship skills and encourage all gun owners to seek out some form of competition shooting. Anyone can become reasonably good at it if they devote the time and resources to do so. Winning, while nice, need not be your goal; bettering yourself through the pursuit of excellence is something we all can achieve.
View all posts by SinistralRifleman →
This entry was posted in VEPR-12. Bookmark the permalink.
Loading Comments...