Posted on June 21, 2015 by SinistralRifleman

At the end of May I had the opportunity to attend the Suarez International Ultimate Combat Rifle Camp in Prescott, AZ taught by Gabe Suarez himself.  The class was an over view of a lot of subjects related to use of the rifle in a fighting role from basic manipulations, stances and ready positions to close range gun fighting, intermediate distance shooting, and basic team tactics.  The class was 4 days long and required a minimum of 1000 rounds.  While I have been using Suarez gear since 2010, and I have been representing the Suarez Group at shooting competitions since 2012, this was the first Suarez class I have taken. 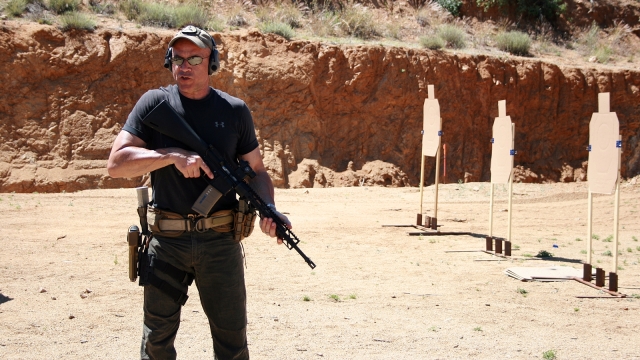 Gabe discusses close range use of the rifle. 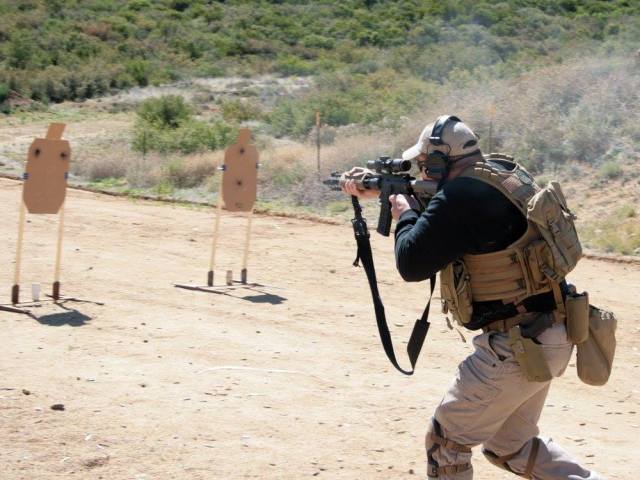 Some portions of the class were a significant departure from what I had experienced before.  Particularly when it came to employing the rifle fast and efficiently off both shoulders at close range while moving.  I could see the benefit to Gabe’s method within the context he was teaching it.  Gabe’s methodology for transitioning shoulders is based upon making reasonably good hits at close ranges while moving; the methodology I had been previously taught was based upon working around barricades and making more accurate hits on targets at 50 yards+.  So while what I had been taught before wasn’t necessarily wrong, it was less efficient in this context and I found myself struggling to unlearn the process I had practiced for so many years.

Gabe himself isn’t an absolutist and looks at all techniques with a critical eye.  He cautioned the class to beware the instructor that tells students there is only one way that is the best way for all situations at all times.  The techniques and procedures Gabe teaches have been worked on and refined at multiple levels; range work, force on force, and sometimes validated in actual gun fights.

The students in this class were very, good particularly for the number present.  Normally classes have one goofball for every 8-10 students, and this class had none.  Everyone that came was serious and safe about their gun handling.  The students  represented a broad cross section of Americans; farmers, construction workers, photographers, law enforcement, and other gun industry people like myself. 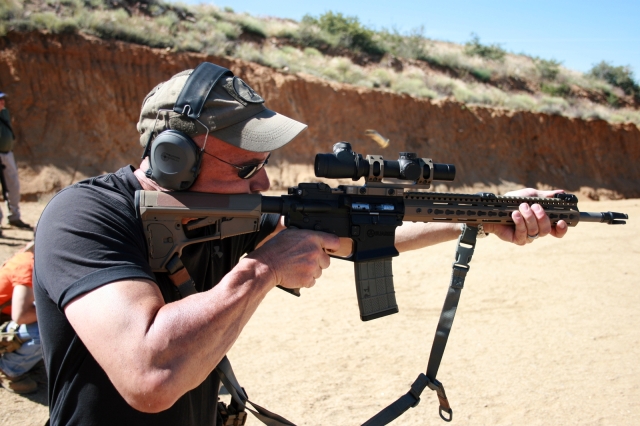 Gabe’s instructional method is very adult education oriented.  Techniques are discussed in detail, then demonstrated cold, then demonstrated live.  Students then try the techniques cold, receive correction as necessary, then try techniques live, then receive more correction as necessary.  This is a stark contrast to other venues I have attended where it was almost as if the instructors wanted students to fail so they could yell at them and “add stress”. There was none of that present in Gabe’s class.  People were professionally informed of what they needed to correct both on and off the range and that was all.  In some cases I saw people struggle with physical limitations and fatigue by the fourth day.  Gabe simply told them to dial back on the speed and do things safely and not hurt themselves. They’re there for knowledge and getting hurt doesn’t help learning. Gabe is a wealth of information for firearms instructors to learn how to teach and manage classes.  I learned a lot about how to improve my own classes by observing this one and in my discussions with him. 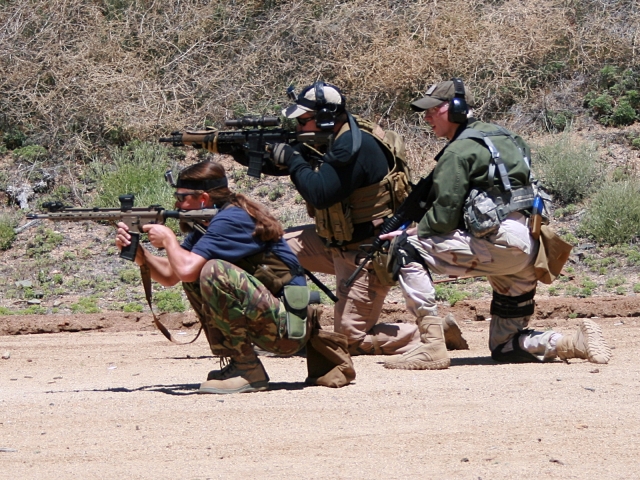 Team work drills started the end of the third day and carried through the fourth and final day.

Gabe told us that part of learning to use a rifle effectively is employing it as part of a group.  If a disaster did occur that resulted in the break down of social order, as has happened a few times in recent history, the ability to defend one’s family and friends may be dependent upon working as  a group.  Some students posed the question, “what do we do if the people we are with have no training”…Gabe’s answer was in that kind of situation it would be incumbent upon the most experienced person to give instruction and direction.  There are a lot of people that are decent enough at doing things, that simply need the go ahead from someone to take action.

Movement and communication procedures were discussed and practiced along with patrolling formations and react to contact drills.  These were not comprehensive, but meant as an introduction to concepts should students want to take higher levels of training.  Everything was rehearsed dry several times before going live. One thing that became apparent to me during this portion of the class is that most people don’t like telling others what to do, or were uncertain how much direction they should be giving.  After seeing some team mates struggle with this, I filled in as “squad leader” for our group.  I had some previous experience doing similar activities in other venues so that definitely helped.  Being mentally aware and confident in ones own abilities and equipment allows looking at a larger picture and giving the team direction.

Aside from the knowledge gained at the course, it was a great physical prep for doing the Ironman 3 Gun a week later.  Wearing 50 pounds of gear running around in 100 degrees for 4 days and shooting 1200 rounds of rifle in a tactical class was remarkably good practice for doing the same thing a week later in the match environment.  Normally the first few stages at a big event I feel like I’m getting settled in, this time I felt primed and ready to go.

Should You Take This Class?

People interested in the martial application of the rifle would benefit from taking this class.  How much so depends on your previous level of training.  What I can say definitively though is Gabe runs his classes professionally and he is serious about delivering a quality product to his customers.  There aren’t a lot of people teaching professionally today that have won multiple gun fights as a lone individual (not part of a fire team or SWAT unit).  Gabe is one of the few that has.  I am willing to make the assumption that this makes his training more relevant for the private citizen than many other venues.

I've been competing in the action shooting sports since 2002. I believe competition shooting to be an excellent way to build gun handling and marksmanship skills and encourage all gun owners to seek out some form of competition shooting. Anyone can become reasonably good at it if they devote the time and resources to do so. Winning, while nice, need not be your goal; bettering yourself through the pursuit of excellence is something we all can achieve.
View all posts by SinistralRifleman →
This entry was posted in Training. Bookmark the permalink.
Loading Comments...