Posted on January 7, 2015 by SinistralRifleman 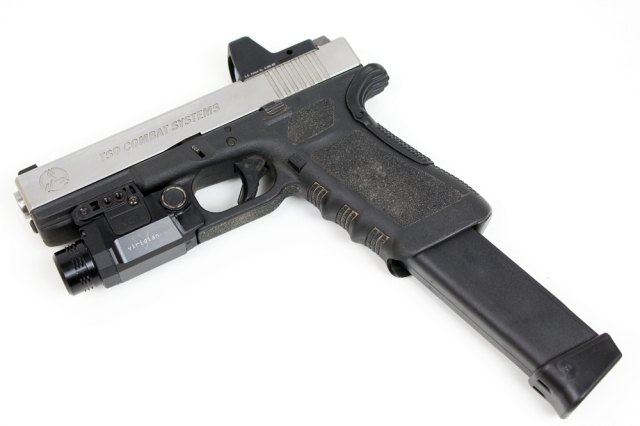 One of the best things about competition is using it to validate equipment you are using.  Did it help or hinder your performance?  Being forced to solve a variety of shooting problems that you might not want to practice on your own helps in validating how well your equipment actually works.  Having just shot the Hard as Hell 3 Gun 2014, It made for a good opportunity to discuss how using an RMR Equipped Glock helps solving these problems.

1) Tracking moving targets: with both eyes open, a clear field of view, and a single aiming point it is easier to follow targets through their movement path and send the shot.

2) Calling missed shots: My shooting isn’t perfect and you’ll see me miss in the videos below.  However, when I do miss it is generally easier to see where the miss was and correct accordingly.

The bounce in the dot allows me to see when I am actually stable enough to make certain hits vs not stable enough.  Getting used to reading the dot and watching for that 1/10th of a second pause to send the shot allows for more consistent hits on smaller or farther targets.  More accurate shooters aren’t necessarily more stable, they simply have a better understanding of the timing of when they should fire a shot when it is least effected by respiratory and cardiac function.

If you have a RMR equipped Glock you can do this exercise without any shooting simply hold it at arms length and get used to the cognitive process of watching the dot to stop moving, for most people this will be a 1/10th or 1/20th of a second pause.  When that pause occurs is when you want to pull the trigger.  Keep in mind that human reaction time takes you 0.20-0.25 seconds to pull the trigger from when you decide to do it.  So pulling the trigger must be timed in sync with that 1/10th of a second pause.  This is a difficult mental process to teach people, you must be able to self identify your own natual pause and time your shot with it.

There was a lot of 35-50 yard pistol targets at Hard as Hell.  With a 10 yard zero on my RM01, hitting them was pretty much a point of aim, point of impact event.  It’s not to say these shots can’t be made with Iron sights, but they require a higher threshold of skill to do so consistently.  I watched shooters of similar skill level struggle with more rounds sent down range to hit this targets than it took me.  I know for myself, it would have taken me more rounds with my iron sight equipped Glock.

There were a number of stages that required one handed shooting by design or because it was the best way to shoot around props and obstacles.  The ability to read the dot makes one handed shooting accurately a more natural process.  Shooting one handed it is also natural to cant the gun with the arm extended, this can cause misallignment of iron sights.  With the dot, this is not a concern.

Here’s all the portions of the Hard as Hell 3 Gun 2014 where I used my RMR Glock.  Please understand that you’re only seeing 1/3 of the match in this video.  And if you’re wondering why I’m missing more or breathing hard, I may have just run through an obstacle course.  Over all, solving all the shooting problems encountered was easier for me using my RMR Glock for the reasons explained above.

I've been competing in the action shooting sports since 2002. I believe competition shooting to be an excellent way to build gun handling and marksmanship skills and encourage all gun owners to seek out some form of competition shooting. Anyone can become reasonably good at it if they devote the time and resources to do so. Winning, while nice, need not be your goal; bettering yourself through the pursuit of excellence is something we all can achieve.
View all posts by SinistralRifleman →
This entry was posted in Competitions, Red Dot Glock. Bookmark the permalink.