Gearing Up For Ironman

I get a lot of questions from people interested in Trooper division about what kind of gear I use or what I recommend taking.  The firearms and gear I use work well for me as a total system, and may not work as well for someone else based on their shooting techniques, stature, or physical fitness.  Consider the following as a guide for things to consider for your own Trooper gear. 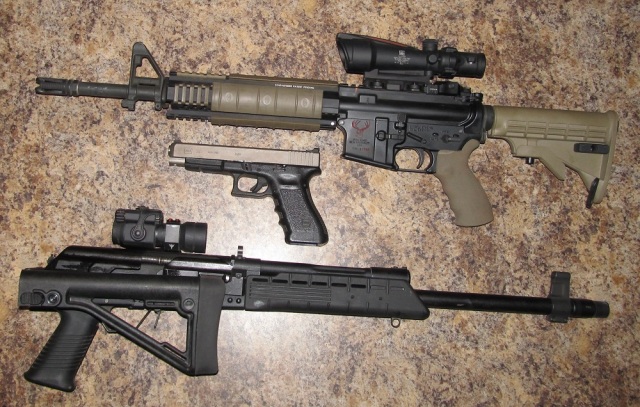 Unfortunately I did not have enough time on all my primary guns before Ironman this year.  I am taking all these as back ups in the event I have a problem with any of the primaries. I was fortunately able to diagnose an intermittent malfunction in my primary rifle and fix it by replacing a weak extractor spring before going to Ironman.   Because I am bringing these and carrying them with me from stage to stage, I probably won’t need to use any of them.  Every time I carry spares I never need them.  I am not superstitious about many things, but I am a firm believer in Murphy’s law.  It’s a good thing the farthest hike is only a half mile round trip.

There are no restrictions on magazines capacity in Trooper.  30 round glock mags make for less reloads. I still bring standard capacity magazines to deal with stages where a 30 rounder is a liability; i.e. shooting prone. 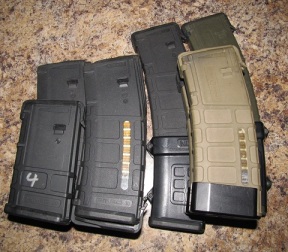 Five 30s, One 20, two 44s, one set of mag cinched mags to use as is most advantageous based on stage design. 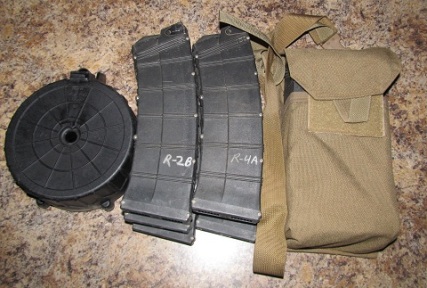 One 20 round drum, ten 10 round AGP magazines for the Saiga-12
The 20 round drum is ungainly to reload with, I only use it at the start of the stage.  The 10 round magazines I download to 9 rounds to make it easier to load on a closed bolt.  The mag bandolier is useful for the few occasions I need more mags than my vest carries.

Cleaning supplies, tools, and spare parts.  The range in Parma, ID has fine moon dust like sand that can coat everything if the wind picks up.  One of the things many competitors overlook is brushes to clean magazines out after they get thrown on the ground. 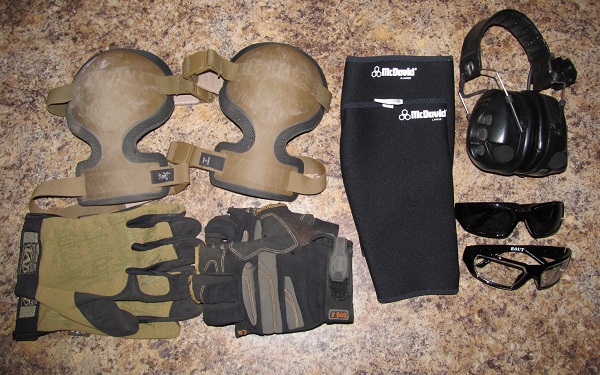 Arctyrex Knee Pads are lightweight, secure and effective.  I find knee pads let me get into shooting positions more aggressively.
Mechanix gloves with and without fingers.  I use the fingerless gloves for most stages, unless I need to hold onto a rope or carry something abbrassive.  Either way the amount of shooting at Ironman wears on your hands, and having gloves makes it easier to get into and out of pron positions faster.  In particular wearing gloves makes shooting the Saiga-12 less painful with all the sharp edges on the AK design.
Wiley X ROUT prescription sun glasses, and clear safety glasses.  Lighting conditions vary throughout the match and include some low light areas like killhouses and tunnels.  I really like these glasses because they have a large usable lens area which makes seeing clearly from different shooting positions a non-issue.
I wear calve supports to prevent strain.  The rapid acceleration and decelartion required by action shooting has caused me calve strain in the past.  Not only do I want to prevent injury, but I want to minimize soreness over the course of the match so I can do my best on each stage.
Peltor ear pro with mount for my POV cam

The only food Troopers can eat aside from lunch, while on the range is whatever they carry with them.  Rehydration drinks and candy are a particularly good idea

(I have more to add later)

I've been competing in the action shooting sports since 2002. I believe competition shooting to be an excellent way to build gun handling and marksmanship skills and encourage all gun owners to seek out some form of competition shooting. Anyone can become reasonably good at it if they devote the time and resources to do so. Winning, while nice, need not be your goal; bettering yourself through the pursuit of excellence is something we all can achieve.
View all posts by SinistralRifleman →
This entry was posted in Competitions, Gear, Ironman 3 Gun. Bookmark the permalink.

3 Responses to Gearing Up For Ironman