Posted on April 24, 2012 by SinistralRifleman

Leupold’s HAMR scope is a relatively new entry into the market for low-fixed power optics, competing most directly with the Trijicon ACOG.  You can read all about it here on The Firearm Blog.  I have had a HAMR for a few months now and the things I like about it most are the long eye relief and adjustable brightness reticle. Another noteworthy feature is the mount has different screw holes that allow the user to adjust how far forward or back the scope sits in relation to the shooter’s eye while remaining in the same rail slots.

The HAMR I purchased came with the Leupold Delta Point reflex sight mounted on top at the front of the scope.  Leupold’s choice to mount the reflex sight forward on the HAMR is much more user friendly than mounting it at the rear like the ACOG.  I have previously used a Doctor Optic mounted on top of an ACOG, and I constantly had the bill of my hat banging into the Doctor when I used the ACOG.  This was distracting and the primary reason I did not stick with the ACOG/Doctor Combo.

Unfortunately, while I like the position of the Delta Point on the HAMR, I do not care much for the sight itself.  Zeroing the delta point was a frustrating experience.  It uses very small screws for the windage and elevation adjustments and two small screws to lock those in place.  With the Delta Point mounted on top of the HAMR loosening those locking screws was challenging.  I had to remove the Delta point to have sufficient leverage to loosen them.  Adjusting windage and elevation was also tricky because there is just gross screw adjustments; not clicks for known measurements.  When compared to the Trijicon RMR LED model (the most directly competing sight), the Delta Point is lacking in ease of use.  The Delta Point is slightly smaller and about $100 cheaper, but the ease of use of the RMR offsets these disadvantages.

When I am competing in Open or Trooper divisions, I like the option of a red dot for close range stages.  I also prefer the secondary red dot mounted on top of the primary magnified optic rather than offset so I can use it off either shoulder; stage design often forces me as a lefty to shoot right handed.  I was disappointed that the Delta Point on the HAMR was not the solution I had hoped it would be.  Fortunately Hahn Precision is working on a mount that allows the use of an Aimpoint Micro on top of the HAMR.  The Aimpoint Micro is an extremely rugged sight with easy to adjust windage and elevation and adjustable brightness.  Furthermore the closed tube of the Micro will not gather dust/debris like the Deltapoint or RMR when exposed to the elements.  The  Aimpoint Micro is a natural companion optic for a military grade sight like the HAMR.  Pictures of the prototype system are below.  I am looking forward to using this system in the near future. 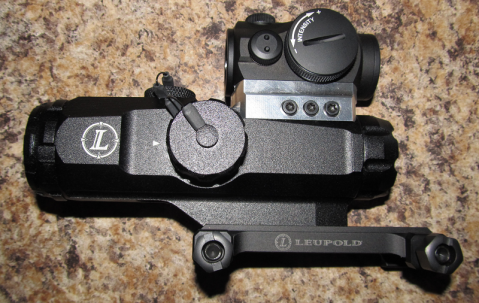 I've been competing in the action shooting sports since 2002. I believe competition shooting to be an excellent way to build gun handling and marksmanship skills and encourage all gun owners to seek out some form of competition shooting. Anyone can become reasonably good at it if they devote the time and resources to do so. Winning, while nice, need not be your goal; bettering yourself through the pursuit of excellence is something we all can achieve.
View all posts by SinistralRifleman →
This entry was posted in Gear. Bookmark the permalink.
%d bloggers like this: